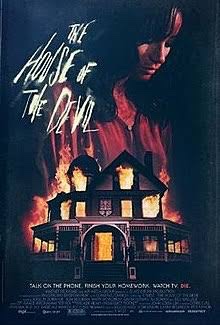 Directed by Ti West (known for The Innkeepers and, most recently, the Netflix series The Chambers), House of the Devil is a moody homage to 80s horror. Filmed in 2009 and set in the early 80s, the filmmaker did such a good job capturing the look and feel of a horror film you might have rented on VHS back when that was thing, that I didn’t even realize it was a modern film until it was almost over.

The film focuses on college student Samantha, played to 80s horror heroine perfection by Jocelin Donahue, who is desperate to move out of the dorm room she shares with her oversexed roommate. She finds the perfect apartment, shown to her in a brief (and somewhat unnecessary) appearance by Dee Wallace as the landlady. Sadly, Samantha can’t afford the rent and is forced to earn some quick cash as, you guessed it…a babysitter.

Fortunately Samantha finds a flyer on campus promoting a very well paying babysitting gig and calls the number from the tab she rips off (much scarier than a modern day internet ad). The high paying job comes with a catch, she has to go to a remote location that night which happens to coincide with a lunar eclipse. I think you can guess where this is headed.

Desperate for cash, Samantha reluctantly takes the gig. Fortunately, her nice friend offers her a regrettable ride to the creepy house where she is greeted by an equally creepy Mr. Ulman, played by Tom Noonan. She soon finds out that babysitting was not the primary motive for getting her to this place.

The remainder of the movie is a slow build towards a sinister conclusion. Honestly, not much happens as Samantha tries to keep herself busy listening to 80s music on her Walkman (remember The Fixx?), playing pool and ordering a soggy pizza. Throughout this minutia, tension grows as we sense her getting closer to finding out what is actually going on in this old, dark house.

The lunar eclipse might give you a hint of what Samantha will encounter (as well as the spoiler image at the bottom of this review) but the plot is not the most notable feature of this stylish film. I really appreciated the filmmaker’s effort to make the main character real and empathic which ensures you care about her slow, somewhat tedious journey to what awaits at the end.

Tom Noonan is well cast as the mysterious man with a plan while Jocelin Donahue portrays 80s college girl heroine with understated perfection. West’s attention to detail in making this film, from its VHSesque (is that a word?) visual quality to the 80s soundtrack throughout, sets this film apart from others in the well worn terrorized babysitter genre. If you appreciate films that value style as much as plot lines, then The House of the Devil is worth a watch.

4 thoughts on “The Devil’s in the Detail: The House of the Devil Review”